Interview Thursday:"Is not the State right to tell citizens how to dress and is a blatant violation of individual and collective human rights"- Sokari 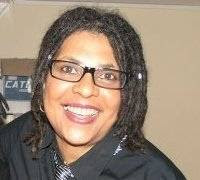 Sokari is the outstanding and legendary publisher at Black Looks blog. She is a Nigerian blogger that has being blogging since 2004 before I even know what blogging is all about.

She was part of a group of bloggers who connected the world leaders at the G20 summit in London to the rest of the world. She is an activist of note that fights and defend human rights in all sphere of life.

It was a great pleasure for me to have met her at the Info-activism Camp in Bangalore India, where we became friends. She share with us her view on Niger Delta crisis, the resuscitation of the indence bill proposition and LGTBI rights.....

What is your view about Niger Delta crisis?
It is an act of war by the Nigerian "military" government against the Nigerian people. This attack is the latest in a series of systematic attacks against Nigerians of the Niger Delta which has been on going for the past 20 years from Babaginda, Abacha, Obasanjo and now this pathetic individual who calls himself President when in fact he was never even elected - unless you call rigging an election a legal process. What is unfortunate is the failure by the weak Niger Delta states leadership - Senators, representatives, governors, traditional rulers - to come out and condemn these acts of violence against ordinary people and their land and property. The other unfortunate aspect of this is the focus on MEND and other militants by the Nigerian media and public. This focus is what the Nigerian government want people to do instead of focusing on the brutality of a government attacking its own people over and over again. As for the militants they themselves represent a step in a long process of resistance and struggle which due to the violence of the Nigerian state has now led to the growth of the militant movement. Personally I believe that resistance and struggle should be a non-violent process - the militarisation of the issue of the ND is not the answer.

Do you think the government has done enough to end the crisis and bring about peace?
No, the Government and their puppets (see above) are the ones causing the crisis. People want schools, hospitals, roads, electricity - whether in the ND or elsewhere. People know that it is the oil from their land that has fed the country for 50 years - built Lagos, built Abuja - but they have received nothing. The ND leaders are also guilty of corruption and betraying the people - always ready to be bought off by the Federal government.

Do you think the militants are representing the people of Niger Delta or are they fighting for their own personal gain?
Yes, I do think the militants represent the ordinary people of the ND. Where they fail is they do not appear to have any idea of what they would do if they did have control of the region. How would they govern? What is their endgame? They do not appear to have a political wing which has some idea of what kind of social, political and economic organisation they would put in place. This is not the way to conduct a struggle.

What do you feel will help in resolving the Niger Delta crisis?
The struggle in the ND is applicable to all Nigerians. We are all affected and involved in one way or the other. It is not a question of ethnicity but of governance ie corruption, mismanagement but most of all GREED! If all Nigerians collectively chose to protest against all of these and refused to accept thieving leaders then the ND issue would be solved because then the region and the rest of the country would be developed as it should have been. there is no economic reason for Nigeria to be poor and to lack decent roads, hospitals, schools, electricity and water - no need at all.

As a human rights and feminist Activist, do you think the Nigeria government is reasonable about the denial of the existence of gays and lesbians in Nigeria?
No, I think they are ridiculous along with the religious hypocrites of all types. Everyone knows LGBT people exist and have always been part of Nigeria since time. Nigeria is no different from anywhere else. They can deny all they want but that will not change the fact that LGBT not only exist but exist amongst the government itself!

Is it a wrong thing for any individual to have sexual preference and do you think LGBQT are western ideas?
No, I dont, it is not wrong for two consenting adults to love each other and want to build a life together. It is not the end of the human race because not everyone is LGBT and never will be. I have heard men condemn sodomy between men - yet these same men commit sodomy with their wives! There is so much hypocrisy amongst Nigerians and the continent especially amongst religious people. In fact the more religious the more intolerant and less accepting of difference amongst people. These people are quite happy to take up a Western religion and worship god who is white with blond hair and then have the audacity to say that LGBT is unAfrican. How unAfrican are blond men?

Senator Ekaete is bringing forth the bill of indecent dressing in Nigeria, how do you think this will affect the fundamental human rights of the people?
Again this is borne out of a culture of religious intolerance and repression. The state, is not there to tell citizens how to dress and is a blatant violation of our individual and collective human rights. Who are they to dictate what is decent or not. Even if one goes back to tradition and 200 years ago - how many traditional atires dressed women in short wrapper and even are bare breasts or men with bare chests and arms? Rather than focus on these kind of repressive dictates rather they should be putting all their efforts into ending the real disgusting behaviour known as corruption and greed. People want to tell me how to dress yet they cannot even provide a decent clinic or electricity because they are busy stealing money - how stupid and ignorant is that?

What do you advise the concerns Nigerians to do in order to stop the passing of indecent dressing bill?
Petition the Senate - attend the sessions and present the case against it. Refuse to adhere to the dress codes - can they arrest everyone? No they cannot. What did the Black people in the southern US do when they were refused access to certain eating places etc. They refused! What is wrong that we cannot mobilize a campaign against this! So what we must all start walking about in long gowns covered from neck to our feet, because once they start they will not stop believe me - I cannot see people agreeing to this kind of nonsense.

With the 10 years of democracy in Nigeria, I am yet to see any great impact it has made, do you share this view with me, if yes, how can we improve in Nigeria?
Yes you are right. Democracy in Nigeria is a lie. We are no more democratic today than 20 years ago. In fact I still believe we live under a military government since it seems our leaders come from that group directly or indirectly and have the same mindset. Does anyone seriously believe Yar'Adua is running Nigeria. (I refuse to call him president because he was not elected. No one in my village had the opportunity to vote as the polling booth never opened and that was repeated in many places) I think I have answered this above but ultimately Standtall, it is the responsibility of Nigerian citizens to bring change. It will not come from the leadeship but from ordinary people and civil society.

Who is your role model and why is this person considered your role model?
To be honest I don't have an individual role model as such. What I do aspire to and the people I celebrate and honour are those human rights activists who have often put themselves literally in the line of fire and make a stand for what they believe in. Writers, poets and artists who use their creative talents to challenge injustice. They are everywhere and many are ordinary people whose names we may never know. These people are my role models, heroines and heroes. In Nigeria women such as Hauwa Ibrahim, Margaret Ekpo, Funmilayo Ransome-Kuti and of course Fela. Ken Saro-Wiwa and Adaka Boro {Ijaw activist of the 60s). My dear friend Victor Mukasa a human rights defender and LGBTI activist from Uganda, writers such as Aminata Sow and Mariama Ba of Senegal; Another good friend, South African lesbian activist and photograher, Zanele Muholi; The late great Sembene `Ousman - film maker and activist; young people who are free - free because they respect and honour their mothers through history and have the strenth to stand up against intolerance and ignorance like Dominican and South African rapper & poet - PlanBe; and finally ALL MY SONS are my heros too!
Posted by The Activist at 9:10 AM

Thanks for an informative interview I liked her point of veiw. Clothes and dress code are a sensitive issue and who should tell who how to dress its a hard one that one

This is a mighty heavy article and, given some of the content, I have a feeling that it is not without risk and takes courage, both for Sokari to say what she says and you to conduct such a candid interview.

Do you feel that there is any danger posed toward either or both of you as a result?

Whatever, remain strong and keep your courage.

Nice one, Never heard of her before now. Great woman!

Havent heard of her before now but I am so glad you introduced us all to her. What an amazing, strong and smart woman. I could not have worded her views on the niger-delta issue better. Her points are so good and so head on..

great questions Standtall and great interview Sokari I am inspired.

Hey Standtall - naw wa wa wa thanks so much for putting this up - and thanks to everyone for all your supportive and appreciative comments.

@Graham - speaking to truth always has its dangers - its too late to turn back and anyway being out makes your words carry more weight! thanks for appreciating.

I like Sokari's point of view. I agree with her on most points and we even admire some of the same people such as Hauwa Ibrahim, who's work I researched for my thesis.

@ GK: Hmmm there is always danger attached to speaking the truth and being daring but we will be fine. Thanks for your concern my dear friend.

Oh My Bast, what a wonderful interview! Please, please God, keep Sokari and Standtall safe! And no, God is not just white and blond, He is God of all colours and races, and since He created Male and Female, He must incorporate She, and She must incorporate He, don't you all Standtallers think?

Thank you so much for the award, I'm honoured!