REVOCATION OF ''MEMBERSHIP'' OF NIGERIA BY A NIGERIAN IN ARGENTINA

I read today, about a Nigerian who is in Argentina, who yesterday (or today in Argentina), had written to the Nigerian Ambassador there to transmit his letter to the Presidency, about his revocation of Nigerian citizenship, to which he called ''membership''. I share with you, his thoughts. - Anonymous
Revocation of my Nigerian “membership”
Tops of the day to you all,

I’m using this medium to renounce my membership or you may use the word citizenship. The reasons can be seen in this piece attached Since I was born, I've been told that I'm Nigerian; the nationality of the people from that land mass around the River Niger which was created from the amalgamation of various kingdoms by the British and the name coined and enforced by some Brit called Lugard, I'll throw up in my mouth if I use the word "Lord" before his name, and his mistress in 1914. 97 years on, everyone that was every born or came out of that region will be known as Nigerian. - A heavy mental blow dealt to people from various kingdoms and identities. A chain that will bind their fates together in an unholy way for almost a century, I suddenly began to reason; if a Frenchman is from France, an Englishman from England, a Spanish man from Spain, a Portuguese from Portugal then why aren't I, a YORUBAMAN from YORUBA KINGDOM??

Nigeria may stay or fall, but I'll always be a YORUBA MAN! We all need to realise some hard truth, that for many years we have been avoiding and running away from. This union called Nigeria wasn't made by our own accord! THIS IS STILL SLAVERY! This is nothing more than the slave master gathering up all his slaves, bonding them together with his slaver master powers, making them work and live together for years, creating an identity for them and after a while stepping aside. Those slaves still are bound by the curse of that slave master! And the people that make up Nigeria are still bound by the curse of the British and later brought in his American buddies for the feast, the feast of flesh and blood!!

The greatest form of freedom is that of the MIND and the attainment of a new level of consciousness as our own people, as independent people as free people is our only way forward! For 51 years since the so called independence, which during the last one I asked "Independence from what exactly?", we have been entrapped, enslaved and bound within this union, running helter-skelter like sheep without shepard. For 51 years, we have watched our lives, hopes and resources plundered, as this was never our home? The nation was never ours in the first place, it was that of the colonial master- It was his nation, his creation and his large backyard he got his oil, minerals, tested his medicine, economic and political experiments in!

It was his own little playground and the so called rulers his sheep and dogs. The Sheep and dogs he could commands and control, which is why we see that our so called leaders aren't there for the benefit of the people. As the people- Nigerians is an abstract concept which doesn't exist in any real sense, but rather for the reason of exploitation, oppression, control and repression! Take a look around you today and tell me what exactly it means to be a Nigerian, take a look around you today and tell me if it actually means anything to us other than that geographical location- something like a foreign product manufactured in China which is exported for the use of others but still carries the tag - Made in China, so Nigerians are a foreign concept conceived by the British and manufactured in the area called Nigeria! In 51 years, we have been plagued by our differences in every form, our differences which existed in most parts before the formation of Nigeria but never so violent and barbaric, those have now become the order of the day.

If we well, we've had enough, the fine; we go our separate ways with mutual respect for each other and return to our kingdoms! I, personally uses this medium to renounce my membership of Nigeria and tender in my membership card- which I'll be doing later this week in an official letter to the caretakers or so called presidency through one of the embassies. Hence I'll be officially stateless, nation less BUT a FREE man, a man from an ancient Kingdom albeit still held captive by Nigeria and her owners, a man fighting for the freedom of his people and a Kingdom that supersedes all these nations and states. I'm YORUBA; that is my ancestry. That is my IDENTITY! That is what DEFINES me. As we attain a higher level of consciousness we shall all see this!
Kindly find enclosed a copy my Nigerian “membership” booklet #A3101928. The original I’ll hold on to as a souvenir of a sort for generations to come.

What do you think about this soul cry people?
Posted by The Activist at 6:55 PM 11 comments: 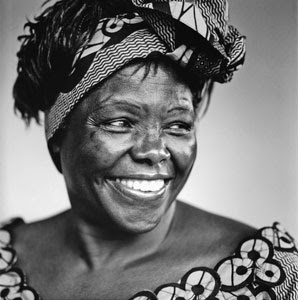 Prof. Wangari Maathai did not need any introduction growing up in the eighties and early nineties. She was there already, in the news and in hushed conversations in our living rooms and market places. The strong dark woman in African prints and braided hair,speaking truth to power when no one dared question Moi.

She was there even after Moi called her the crazy woman with insects in her head and sycophants in parliament chorused calling her a badly behaved woman and a divorcee who was a threat to Kenya's national security.

She was there in press interviews and run-ins with the establishment’s hired goons after graciously kneeling to plant a tree.

She was there, at home with grandmothers in villages urging them to plant more trees,as she was, dining with world leaders in exclusive locations explaining complex concepts of why they urgently need to address climate change.

The grey Monday morning she left us signified the mood that enveloped me and indeed Kenya and the world as we came to terms with the loss of yet another great non-conformist whose courage to turn her back on old formulas while inventing the future had left an indelible mark in Kenya and the world we live in.

Again the words of Thomas Sankara, the former revolutionary President of Burkina Faso rang true to the person that Wangari was: another ‘crazy’ woman who engaged in the politics of space at a personal and public level.

At a personal level she confronted patriachy refusing to be cowed into oblivion by her ex-husband, thereby affirming Laurel Thatcher Ulrich’s words that ‘well-behaved women seldom make history.’By Wangari’s refusing to conform as a ‘well-behaved woman’ in her private space she made history and expanded the public space for women and men at a national and international level in various spaces such as the academy, in politics and most importantly the ecological space which she was later feted for as a Nobel Laurent.

These instances of madness and non conformity have led to several legacies she left us on environment, women’s emancipation and politics.On the environment, her madness finally bore fruit when she recovered and secured our public spacessuch as Uhuru park, Karura forest and more recently our water towers: the Aberdare and the Mau complexfrom landgrabbers and corrupt politicians.Internationally, as the co-chair of the Congo-Basin fund she tirelessly campaigned to save the African water tower.

On local politics, she refused to conform to the politics of handouts in her Tetu constituency and left a legacy that is evident in the numerous development projects she initiated. At a national level, she stood by her convictions no matter where her ethnic group, religion or political party was, which cost her the Tetu Parliamentary seat in 2007 when she failed to support the Bananas/Yes team in the referendum.

On women rights, Wangari was a feminist par exellence, who exemplified the personal is political mantra from her days in the National Council of Women of Kenya, as a founder of the Green Belt Movement, to her role as Chairperson of Maendeleo ya Wanawake(MYWO) when she publicly initiated a campaign that supported Wambui Otieno’s bid for SM’s body.

Many ‘well behaved women’ who were beneficiaries of the patrimonial politics of Moi’s leadership refused to support Wangari as she fought for the rights of another ‘crazy’ woman and for a younger generation of Kenyan women who now enjoy these rights.

In conclusion, the most notable constant that enabled Wangari and Wambui to soldier on despite adversity and insulting labels such as as ‘mad women’ is their great love for humanity.

A love so great that their revolutionary legacies will be celebrated forever.They both exemplify Che Guevara’s assertion that ‘the true revolutionary is guided by great feelings of love. It is impossible to think of a genuine revolutionary lacking this quality. We must strive every day so that this love of humanity is transformed into actual deeds, into acts that serve as examples and as a moving force.’This is the simple act that these two daughters of Africa urge us to live for and in so doing leave our world a better place than we found it. Love our humanity.

Njoki is a Peace and Security Scholar at the African Leadership Centre (ALC) at King’s College, London.

First appearance of this tribute was published in the Kenyan nNewspaper Sunday Nation on 2nd October 2011
Posted by The Activist at 6:26 PM 2 comments:

Email ThisBlogThis!Share to TwitterShare to FacebookShare to Pinterest
Newer Posts Older Posts Home
Subscribe to: Posts (Atom)
My Passion, my focus, the change that I want to see in the world - is my propellent factor.