The Emusanda ‘Straight from the heart’ Global Partnership 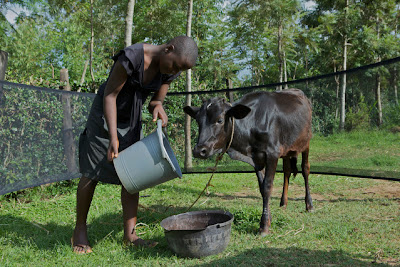 In the cause of making a scheduled trip to Rhodericks Maliatjo house, to carry out ‘fencing’ for the protection of his cows- this is to test the potency of the new project of Vestergaard Frandsen on Food Security- we met Mr. Mathews Olumatete Ofuwamba. Before I share the story of Mr. Mathews, I will quickly touch on the ‘fencing’ method in relation to food security. While skype talking with Torben Vestergaard Franden, he had elaborated on the company ‘fencing’ project in Nigeria, Kenya and Ghana. This new project aims at preventing tsetse flies from killing off livestock’s of famers’ especially those that are into husbandry. The ‘fencing’ is a net system; the net which is black in colour has the potential of keeping off and killing off flies that could pose imminent dangers to the livestock. Live stocks are important food in many places in Africa and farmers who have being struggling to keep their animals disease free, have little to worry about if they can surround their animals space with the nets.

ss Maliatjo fence was the Emusanda Health Centre built by Vestergaard after their 2008 HIV/AID project in Kenya- called the “Integrated Prevention Demonstration”. The history of the health centre was better appreciated when heard from the local who not only donated the land but also believed strongly that Vestergaard has indeed saved lots of lives via this project. According to the down -to-earth, Mr. Mathews Olumatate Ofuwamba who I spoke with, he lost two sons to malaria as a result of lack of medical centre at Emusanda in Lurambi District of Kakamega. The first son died before they could found vehicles or any other means of transportation to take him to the far distance city hospital and the second died on the arrival at the far distance hospital. Both cases where too late and could have being prevented if there were existence of medical centre in their district. Mr. Mathews met Mikkel Vestergaard, the CEO of Vestergard Frandsen during the 2008 HIV project in Kenya and told him about his late son and the burden of taken care of his 10 grand children. That was how what I would love to call ‘Global Partnership” for saving lives began between the man who wanted a change and a company who is ready to offer one. 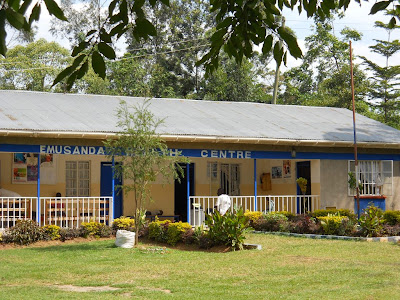 Emusanda Health Centre is now going on phase two development project of providing maternity centre in the district as Vesteergard Frandsen partners with Women Deliver to address goal four and of the Millennium Development Goals (MDGs) – improving maternal health and reducing child mortality rates. As reported by Women enews Kenya ‘the best estimates for Kenya suggest that approximately 14,700 women and girls die each year due to pregnancy-related complications’. In Mr. Mathews own word, some pregnant women at Emusanda had died at home due to long distance to get medical help during labour and also due to lack of medical facilities for women. He is so happy and optimistic that a maternity centre is going to be built in Emusanda. The cost of this project is estimated at 70,000 US Dollars.

I am one of those who critically look at the motives of help coming from abroad but having seeing on ground what it is like for many to have access to basic amenities of life and access to services that keep people healthy and alive, then I would say it is high time for many government to see how their priorities can be rearranged and how they can’t partner with organizations and companies home and aboard to earnest resources to address what matters. There is no nation that can boast of good standard if its people are suffering and if its women are worst off.