Accents and the Tragedy of Self-Hate! by Yemisi Ilesanmi

Yemisi Ilesanmi nailed the need to claim authenticity of one's accent in her latest blog post. I found this quite fantastic... Here is an excerpt: 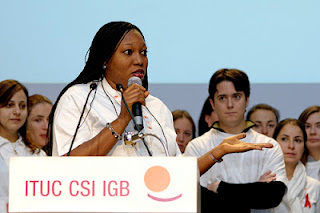 I recently started Video blogging and with it came the barrage of opinionated comments on my looks, appearance and quite interestingly, my accent!
I have never been self conscious about my accent. I started making guest appearances on National TV programs almost two decades ago as a young human rights activist and vocal feminist. I remember the first time I appeared on one of the ‘posh’ Women’s programs which at the time passed as a feminist TV show, I was immediately approached after the show by the popular “polish’ presenter who told me “Yemisi you were really brilliant on the show, only thing is if we could get you to lose the accent”. Well, it happened that the presenter also ran a ‘Finishing school’ for girls ... hmm do not ask me why a “feminist’ TV show presenter had a “Finishing school for girls’’… well, this is Nigeria we are talking about, and feminism , like many assumed “imported” ideology comes with its colonial baggage!
Anyway, she was so impressed with my points but not so impressed with my accent that she offered me a free session in her 'Finishing school' to get rid of my accent. I remember asking her why I would want to be rid of my accent, I wasn’t self conscious about my accent, especially since Nigeria is a diverse country with many local dialects and accent is one of the ways you know where a particular person is from. Well, I was told getting rid of my accent would be great for my profile, I declined her ‘priceless’ offer and insisted that I’d rather keep my accent as it is an integral part of my identity .I have since gone ahead to speak at many national and international events, sometimes with heads of states and diplomats present. I have made a few speeches at UN meetings, appeared on a live televised round table debate with Tony Blair and some other world leaders, but I never for a minute felt self conscious about my accent, and well, my audience never really complained and in some cases, they seemed to appreciate what I had to say. Shows you should choose your audience well!


In 2009, I attended a student exchange program in Indian; I was the only black student in a group of white students. I noticed that the first thing most, if not all, of the Indian lecturers did was to apologize for their accents! I thought that was unnecessary if not outright pathetic. I mean, I paid some serious money for a Masters degree in a UK university, none of the very white, very accented lecturers ever bothered to apologize to me for their British accents, rather, whenever I ventured to speak in the class (and yes, I couldn’t be kept shut) , I at least, made sure I spoke slowly enough for them to get the gist of my comments but did they ever extend such courtesy to me? Hell no! And I am pretty sure the exchange lecturers in UK did not apologize for their British accents to the exchange Indian students sitting in UK classrooms. So why did the Indian lecturers feel they had to apologise for their local accents to the exchange, mainly white students group? Well, somehow I knew (don't ask me how!) that even though i was a member of that group, they weren't apologising to my black ass for their Indian accents! In fact, the default setting is, being an English speaking white person means ‘No accent’ and if at all, it is considered a ‘superior’ accent to what is coming out from a brown or black mouth! Of course having only lived in UK for 3 years, I am still trying to identify the myriads of British accents; from the Manchester accents, to the Lancashire, to the Scots, to the… oh forget it! Yet, I am by default, the one who is supposed to apologize for my accent because I am black and from Africa. Nope, we all have our accents and none is superior to the other...
For the complete article visit her blog
Posted by The Activist at 9:00 PM

In fact!!! Thank you for sharing this.
This is something that vexes me quite a lot-- some people say 'ah you are not trying oh. Do and change your accent nau" and I'm always like, "do the English people change their accent for me? No" and they reply, "you are in their country...2 kazakazakaza... vexing!

Finishing school in Nigeria? Oh mine!! My lecturer dared to complain about my accent when her thick Italian accent and mispronunciations were the joke of the class. In her mind she spoke like a Brit..lol. I do try and speak slowly but that's about the most effort i make.

On point!
I see no reason why I should change my accent from what it is!
It is what it is. You don't like it? block your ears!
I remember working in a telephone market research centre and we had to make loads of calls to interview people on different researches being carried out.I never for one second tried to fake my accent...cos even if i tried, I wouldn't know how to!

So true!
I always wondered too, why we apologize for who we are.

I really dont know who is to be blamed.

The Mobile Vet Clinic is established by Dr Craig Miller that provides low-cost neighborhood health clinics for small animals.Dr Craig Miller grew up in Perth living next-door to his father's Veterinary Hospital in Swanbourne. Dr Craig Miller completed studies in Biology and Biochemistry, before graduating in Veterinary Science from Murdoch University in 1993.
Our goal and promise is to offer house call Veterinary we offer convenience and save your time; as well as to offer their pets the most up to date services to maintain their well being.
http://www.melbournemobilevet.com.au