Early in November 2015 Etisalat Prize for Literature released its approved 2015 Flash Fiction Short Story entries. It enabled the public through the social media to vote their preferred story after which the judges will select winners from the top voted stories.

The idea is to promote upcoming writers in Africa whose stories are unpublished. Three winners will receive the following prizes:
Winning Author
Runners Up (2)
Sounds very promising? There begins the exciting journey of friends rallying round ZebraCrossing, one of the entries on the Etisalat Flash Fiction. The author of this satiric piece that focused on poor service delivery, bad governance and people’s lackadaisical attitudes is Ajisafe Michael Oluwafemi.  He is a promising writer who maintains Flexing Essential Random Thoughts (FERT), an online page where his works are posted for his teeming readership. Ajisafe’s friends in Nigeria and Overseas rallied round his story creating an active support group. More than 10 friends reached over 500 online friends each to vote for Zebra Crossing. In 10 days, his story got over 3000 votes!

This is when the problem started. Etisalat prize displayed “bytes exhausted” message on his story link and the story was gone!  We contacted Etisalat to report this sudden “technical glitch”. No reply was received and neither was the story restored for another two days! When the story was finally back, we continued voting and sharing on social media resulting or over 1,900 shares on groups and individual pages (this was displayed on his link) not to mention the personal messages sent to friends. But the celebration was short lived when the story suddenly disappeared again on the same day.  Then voting closed shortly after on the 25th of November 2015. On the 28th of November, it was discovered that Zebra Crossing is totally gone from Etisalat’s webapage, replaced with “error 404” and  “this article not found” messages.

I had personally taken interest in all the 156 approved entries and voted some captivating stories alongside my friend’s entry. I know for a fact that we had the highest votes as at the time the story disappeared and I had taken screenshots of the voting details. The smartest move of the century! 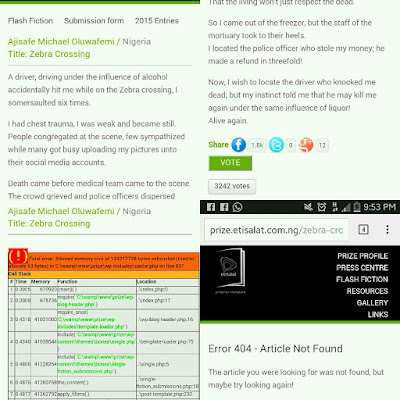 Ajisafe's friends decided to contact Etisalat upon realising this new development. But our email was of course never replied. Then we decided to go on their Facebook page and on Twitter to expose this date rape experience of Zebra Crossing tagging their judges and patrons. Etisalat has initially shortlisted 50 top stories from entries that received over 2000 and less than 300 votes but the highest voted story at our last inventory was not among this list! Finally, after some 48 hours of unrelenting public outcry of many of us demanding to know what happened to Zebra Crossing on their 2015 Flash Fiction Category, Etisalat finally gave into our pressure. Etisalat replied and promised to look at the issue and give feedback. This is promising but I am not deterred to follow up. Thus, the issue did not rest there.

Etisalat thereby restored Zebra Crossing and one other story - that now made the first spot - making the list 52 instead of 50 and Zebra Crossing at number two. I looked through the updated list and I noticed another glitch.  Zebra Crossing vote history was gone and share history on Facebook and Twitter displayed zero! What? I quickly checked other stories and their votes and share history were intact! There ensued another circle of tweeting to ask why. Finally, Etisalat released a separate list showcasing the top 52 stories with voting details, authors names and stories titles. Informing the public @etisalatread that this is the list the judges are reviewing. While on their Etisalat Prize for Literature webpage, the votes and share history of all the shortlisted entries are removed.

I am a still baffled at these inconsistencies and Etisalat’s lack of transparency to tell us why in the first place we have to be having this conversation. A large telecommunication company like Etisalat cannot be having bytes issues at 3000+ votes. It sounds ridiculous and to take out a story that did well on its Flash Fiction category is suspicious to say the least.

I am therefore asking again for Etisalat to tell us the reason behind this unpleasant situation. Nobody has forced the company to give back to the society through African Literature promotion. It is a corporate responsibility that Etisalat has chosen and carrying on with this duty without hidden agenda or bias will be the way to go. If we had not had evidence to back up our claim that Etisalat is bias or has sabotaged a story, it would have gone noticed.

To put this matter to bed, it is desirable that Etisalat tells the Internet community what happened in the first place. What happened?
Toyin Ajao is a peace and conflict doctoral fellow and assistant lecturer at the University of Pretoria, South Africa. She is also an alumna of the African Leadership Centre, Nairobi, Kenya, King's College London, London, UK and Obafemi Awolowo University, Nigeria. Her research interests include human security, conflict transformation, citizen journalism, feminism, gender, and sexual rights.

I eagerly wish to know what happened.

Best technology news website regarding android contacts from windows to android windows google facebook and many more how to tutorials helping the users.marshmallow

I am very happy when read this blog post because blog post written in good
manner and write on good topic. Thanks for sharing valuable information.


This is a great post. I have more benefited from your website. thanks a lot for your performative idea
background removal service

Good information shared. Get a website developed for your blog

Older Post Home
Subscribe to: Post Comments (Atom)
My Passion, my focus, the change that I want to see in the world - is my propellent factor.