PM and its gruesome headlines!

The PM tabloid newspaper will never cease to freak me out. This newpaper comes out in the evenings hence the name. I think they started or get popular the year FelaAnikulapo- Kuti died in 1997.

PM capured the details of Fela's death and the two other death that followed in his family. That of his sister and daughter. They did a good job of reporting Princess Diana's death as well. This was the occurrence of the time but little did I know that is what they love to report. 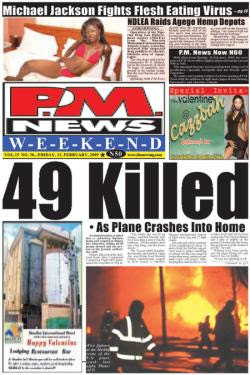 I may be wrong, but 12 years going, the caption of PM front page leaves me in no doubt the kind of message they want to pass across to the people. Nothing gives them joy of selling their papers than reporting gruesome incident and making it the headline all the time. I wonder the extra miles their reporters will go to to get these news. Hmmm in other hand, bad news travels fast.
Just giving examples of their headlines above, not that they don't report other news ranging from fashion to football but these hardly make their headlines. But the gruesome news always does! Well, it's nothing to be surprised about that people buy this paper in thousands.

I really do wonder why good news hardly make the front page in the PM newspaper. To me profit is more important in what they do. It's profit first and to achieve that, they know the mind of the people and use what they know to their advantage. People love bad news! really? When Pastor Chris Okotie got married, well he's a popular figure, the news made the headline but the still attached bad news to the side!

PM, you can do better really. Report news that makes sense and people will still buy. It doesn't have to be only bad news that should make your headlines for your paper to sell.
Posted by The Activist at 11:00 AM

This has to be first.. dt I am first! LOL
That's marketing for you. People love the gory details, believe it or not it sells. And its not just PM, its the network news, the soft sells and main stream papers too.
It begs me to wonder about human nature itself. What is it about another's mishap that draws attention? Maybe its an outlet from one's own misfortunes. I will rather have pity on someone worse off than me than do same for myself.

P.S How have you been?

maybe we are all to blame maybe we are more intrested in Bad news than Goodnews.What do you think?

You're right, and it can be summed up in a phrase journalists use: "If it bleeds, it leads."

Supposedly publishers have tried marketing good-news publications, but they didn't sell to a large enough audience to make the kind of profits they wanted. Bad news is "just giving the people what they want."

bad news travels fast and i guess sells newspapers but it won't do them any harm if they gave us a few god news stories..

ps
this is jarrai-gambian girl. Have changed my url and name so stop by.

Some of our Newspaper Managers believe that sensational stories with screaming headlines sells fast.This strategy has been turned to sheer mischief.I get disgusted when I see a good number of these Lagos Newspapers revelling and celebrating sort of,other people's agonies and misfortunes all in the name of headlines.
Hope you had a pleasant Valentine's day?
Do have a very fulfiling week ahead.

they know that the shock factor sells paper faster - prolly only second to sex.

plus, these kinds of papers are mostly sold in traffic, so they need to catch the reader's attention very fast.

as per ur comment on my blog, are u sending me one for valentine's day or an early birthday present, lol!

It's the same here in the UK, specially with the tabloid press. Even the more "serious" papers seem to feature the gloomiest news on their front pages! I can't understand it, I don't like it, and I don't buy newspapers because I don't like them!

Loved your interview with Doug. He is definitely a V.I.P. (Very Interesting Person, lol!). You really do find some outstanding people for your interviews dear Standtall. Your Sun tarot card is perfect for all you do in support of a better world! Most of the bloggers I've come across are good and compassionate people, humorous too! I think God gave us a sense of humour for a purpose; if you can laugh, you can love. Gosh, where did that come from I wonder, it just suddenly popped into my head!

It's sensationalism my dear. Tabloids all over the world have milked it for years because it gets people's attention and sells. You know what they say about bad news travelling faster...

However, a couple of those headlines were pretty dark. Wow.

The truth is that bad news sells/spreads faster. Only few would really be interested in a headline that reads:LAGOS: THE NEW MEGA CITY. It's sad but true.
Makes you wonder why our psyche works that way.
Happy new week my dear.

P.M News? I hate that paper with a vivid passion. I’m glad I’m not the only one who’s observed the constant scary and negative headlines. Maybe they should change the name of the paper to ‘GORY NEWS’

I hate paper like mad and I even though I was the only one complaining about their gruesome headlines...
And the most annoying and funny part is when their Vendors advertise the papers to ur ears.Come see as Lagosian jumped at the paper..Is true that bad stories sells fast..But I guess we dont have a choice cos the paper as somehow come to stay.Everyone's evening delight.

Couldn't agree with you more.
It's the same ALL over the world.
Unfortunately it is what sells.
I think we as consumers need to be more aware and support alternative newspapers or other forms of media that are trying to do responsible, investigative journalism that focuses on facts and also brings out positive news.
At the same time I think the editors and directors of newspapers etc. should be responsible with what they write and stand more by principles rather than sensationalism. Great post Standtall!

If I left a last post on my blog that I’ve kicked the bucket and all my cash and trinkets stashed in my back garden, I think my Google page rank that is currently "0" will climb to "8" within a week. I will not blame them. If it were I also, I would visit the blog hoping to find the map that point to the location of where the treasures are buried. Bad news sells. I am out. I’m gone to update my will.

Thats why i dont buy the papers here..very depressing!