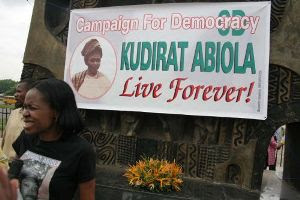 She believed in justice. She knew something has to be done for the winner of June 12, 1993 election to be announced. She joined the likes of Anthony Ehahoro, Wole Soyinka to say no to the annulment of June 12 election where it was clear that her late husband, Chief Moshood Kashimawo Olawale Abiola (MKO) was the winner. The military led goverment of Ibrahim Badamosi Babangida (IBB) annuled June 12,1993 election.

In 1994, Alhaja Kudirat Abiola, wife of the unannounced president - elect of Nigeria rose to defend and fight for democracy when her late husband was incarcerated and kept in solitary confinement for claiming his presidential mandate. She stepped forward in bravery, she was convinced that the military actions amounted to a violation of fundamental human rights of Nigerians to elect their government.

Alhaja Kudirat Abiola joined the pro-democracy groups that marched for freedom in Lagos in December 1995 amongst other brave steps she took to rally for support for the release of her husband as well as the announcement of June 12 presidential election winner.

She never lived to see the daylight of democracy. She never lived to see victory as she was brutality murdered on June 4th, 1996 a few days to the anniversary of June 12, a commemorative date when Nigerians resolved to vote out the military dictatorship. Her life was brutality ended by assassin's bullets. The assassins of the then goverment, the assassins that paid to destroy the dream of democracy.

But Alhaja Kudirat Abiola lived on. Her daughter Hafsat Abiola-Costello started the Kudirat Initiative for Democracy (KIND) organisation in 1998 to continue the work left unfinished. KIND was launched in USA in 1998 where it joined other organisations in the Nigerian pro-democracy movement to end military rule in Nigeria.

KIND (www.kind.org) was established in Nigeria in 1999 following the restoration of democracy. And since inseption KIND has provided opportunities for the Nigerian girls and women to be full participants in the continent's social, economic and political development. Amongst KIND programs are Make Women Safe Campaign: V-Monologue play for violence against women awareness and eradication, KUDRA Leadership Programme and Junior Kudra.

13 years gone by, but she has become a legend, a heroine, she has inspired a lot of Nigerians, she has helped a lot of women and girls live their dreams via KIND. Rest in peace Alhaja Kudirat Abiola. You live on...

During the interview that Hafsat Abiola Funke Olaode published in ThisDay feb 19 2006 has published by Naijablog, she had these to say about KIND, V-Monologue and her late mum:

What is the link between KIND and V-Monologues? 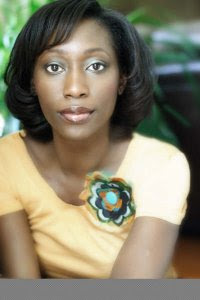 KIND is an organisation which works to promote women and democracy in Africa. Our focus is really on young women because we found that young women and women generally in the Nigerian society go underground when they face any kind of violence. And when they face any kind of violence they become frightened. Because we want to empower women, we have to address some of the obstacles facing in the society. The major obstacle is violence and KIND has set out to address it. You know many NGOs hold rallies, lectures and so on which KIND does regularly. But we continue to look for instruments/vehicles that we can still use to pass the massage across more effectively. That is why we are bringing V-Monologues here. It is part of our culture in Nigeria to gather and listen to stories (tales by moonlight) in our villages. It is also part of our culture to gather and watch plays. It is interesting and beautiful when Africans are watching play. As the play is being performed, you can gauge their response with everyone singing, talking shouting at the same time. I realise that people get involved in plays and I felt that instead of organising a lecture where as many as half of the audience would fall asleep, it would be better to do something that is dynamic, engaging, interesting, and exciting. That is why we are bringing the play V-Monologues.

KIND was established after you mum’s death 10 years ago. Are the aims and objectives of setting up the organisation being achieved?
Well, 10 years is a good time to reflect and say how much KIND has done. I feel happy to say that KIND has achieved a lot in the last 10 years. We did a lot to immortalise my mother, Kudriat Abiola’s name; From the street-naming that we did in New York to efforts within Nigeria to promote young women’s leadership. This year, our leadership programme for young women is expanding because of the support from the European Union and COIDAID. CODIDAID is a Dutch foundation. The two of them are funding us to reach about 1,300 women over the next two years. We are really excited because it brings KIND programmes to a new level. And with this expansion, KIND as an NGO would be the largest trainer of young women in the country. It is wonderful and if my mum were alive, she would be happy to see us training young people in entrepreneurship, financial management, leadership skills, genital and women’s right.

LONG LIVE KIND, REST IN PEACE OUR SHERO.
Posted by The Activist at 12:38 PM

She and her husband do truly stand for democracy and i still think if not for selfish interests by you know who, June 12 should be the real democracy day. nice piece

The Abiolas were the true definition of upright citizens.fought for what they believed in! the rights of the people!

always in our hearts!

May her soul rest in perfect peace.

I still cant believe the "Mystery" of her death hasnt been solved. Wonderful woman :(

What a wonderful woman. May she rest in Peace.
I am happy that her vision is living on through her daughters work.

The organisations are really doing a lot of good things and changed the lives of women...

And I will never forget u Standtall...u've always been a woman's advocate since our University days, and you've lived the dream. U're going places with what u do. Just a matter of time...

I'm scared that military rule might return since we are misusing our democracy with all the current pDP craziness.

I'm happy about KIND's success and wish them luck while they keep Kudirat's legacy alive.

Another informative post. Nice one. Keep up the good work. :)

thanks for the memo, ST. Kudi's memory is obviously not in vain.

Thanks all for your wonderful comments. My blogger acted up yesterday and I lost the message I typed....