Corruption in Nigeria...Beyond What We Think

I am not going to mince words in saying that it looks like everyone is corrupt in Nigeria. I am no longer sure if I am not corrupt myself because after looking around and seeing no way out of paying the money I ought not to pay, I saw clearly the decadence in the system we are running!!! I saw how easy it is for anyone to aid and abet corruption or get the desire to trade in corruption!

When my friend was charged to court in January by her company who accussed her of misappriopration of funds- an accusation father from the truth - but because she has implicated herself in the statement made to the police, she needed surety or go to jail. Before we could rally round to organise all the necessary requests by the court, she was in Kirikiri prison!

That was when I start understanding how deep corruption is in Nigeria, how I no longer see it trickling down from politicians but trickling from other sectors to the politicians. The system is rotten. I am afraid that it will almost be impossible to get rid of corruption in Nigeria. Elections are here and am voting but there is still this feeling at the back of my neck; the feeling that corruption may be here to stay as part of our existence while another part of me is looking inward for innovative ways to curb this bane of our society. 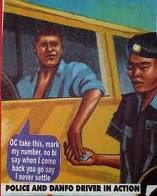 To digress, when I recounted the experience that am about to share to my cousin, who is a journalist, he wasn't surprised, he infact told me that when we are looking at the most corrupt establishments in Nigeria, the politicians are no longer leading. He said we should look into Business, Sport and the Press before we even touch the politicians. But with what I have seen, I will put the judicial system at the very top of this list!

I went to arrange the release of my friend and I was forced to part with money that was not justified but I had to because I could report this to no one! I had to because my attitude that would have being considered sanctimonious would have left her in jail for longer than seven days! We went to visit her at the prison, they made us pay before we could see her. I went to secure her bail, the prosecutor charged illegal fee of N20,000/$130 before doing her job of following the two guarantors including myself to access our houses! We complained, we said we did not have money, and she said nothing would be done if we did not pay! She even added another 5,000/$32 fee as the payment to the police officer whose job was to go get my friend out of the prison! And of course, we still needed to provide a car to pick her to our houses and back to the office!

All these payments are illegal and they are not new and are very normal. I complained to a lawyer who only 'help' as he said was to negotiate reduction of these illegal fees. he claimed nothing can be done. Then I realised that (some) laywers are in this too. I called another lawyer for a second opinion and he warned that we should take extra money to the prison for her release. How worse can this ever get? How far worse? If you have to pay through your nose for all illegalities, how can there ever be justice? What system is ever good enough and ready for the protection of the people of Nigeria. Should we even dare to trust the EFCC? NDLEA? Who can we trust? How many more people will take a cue from this to start their own chain or network of corruption?

Standtall, it's really heart aching! everywhere you go and turn to, you have to bribe and if you are not ready to do that be sure to wait forever or better still justice denied, but i believe we have to start somewhere, and that's start with Us, if we all decide to say NO, their would be resistance but we would get their..

@ Beloved: in fact this experience made me realise how saying 'no' is easier said than done. It is good to have a system of protection in place. Where if they know you will go to they will sit up. Can you imagine lawyers telling you 'it's like that'? I had to choose btw dragging this forever without no where to go but using my pen or social media to talk about it or to leave my friend in jail.

I am still think of how this can be address on a larger scale cuz many pple will be affected this way. My friend even told me about so many women in Kiriki minimum prison who are yet to be trial and some have being there for years!

No is easier said than done.
This is really sad and if you had left your friend for justice to take it course, the world would say you are wicked.

@ Lara: I even wonder if that justice will eventually come without some form of payment or if she would not have being there till next yr!

What a horrific story. Nigerian prisons are probably one of the worst places on earth and I cannot imagine the trauma your friend went through. But heres the thing. If she had had money in the first place she probably would have bribed her way out of going to prison. Worse some people are left in these cesspits for years without trial or conviction. As for the corruptness as long as I can remember it has been like this so much that it is a part of life like eating and going to the loo. No one really bothers and if you do you are considered a trouble maker and outcast.

I believe the justice system is up there at the top of this corrupt mountain - from police on the streets, security, officers, lawyers, judges and prison officials. And if you dont pay the door is shut in your face.

@ Sokari: You have said it all!