NORTHERN VIOLENCE: A FACE OF INEQUALITY AND POVERTY 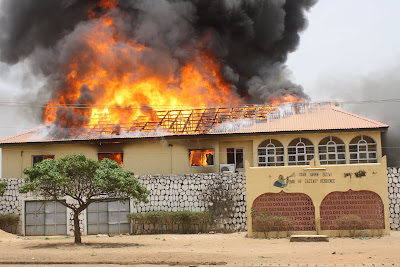 The recent occurrence of violence, killings, rioting and burning in the northern part of Nigeria (i.e Bauchi, Abuja, Kaduna, Kano, Maiduguru and Zaria) that followed the 2011 presidential election is both appalling and heartbreaking. The North has been made fragile and dreaded for so long due to religious, political and other sources of violent killings in the past. On the internet I sought desperately for news and opinions on the terrible situation and got the following answers.

“…am a corper in Bauchi, we were attacked yesterday and our lodge burnt down…most of us got really injured… We’ve been waiting for security to come to our aid, but we have not seen any yet… Please I will be grateful if you know any security number we can call ….they burnt all our clothes the only thing I have now is my phone and my uniform…I want to go home…” An outcry of a corper serving in Bauchi.

‘I went for a conflict resolution workshop, and on discussing issues from northern Nigeria it was resolved that among many deep rooted issues, extreme poverty, cultural mindset and some rich Mafia’s are all behind this, not religion like they make us believe, uninformed teenagers and infants are brainwashed by the Mafia’s to cause violence’. Olubunmi Osinuga Shonde

‘I am seriously against politics of religion and ethnicity. Of course this is to some extent a problem in the North. So, for me the religion and ethnicity of whoever wins the election is not an issue. As for the killings and burnings in the north the reasons are cumulative and complex. Northerners, like all other Nigerians, are fed up with the sorry situation of the country’. Aminu Tukur
‘… Most of those who participated in the horrible riots were young people whose future had been circumscribed by poverty, illiteracy and wanton neglect’ -234Next News.

This killing has left beautiful states like Jos in a state of ruin. Destructive violence is never a thing to dismiss as it claims many lives, properties, and inflow of refugees to abode of endurance, mourning and heartache that many would not recover from. 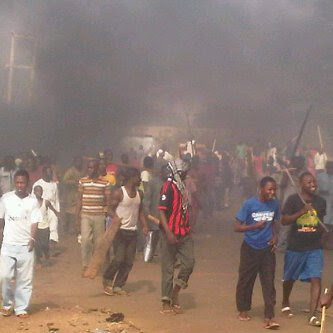 The cost of violence is far greater than we can ever understand. It’s however safer for many people to trade blames and not put effort to understand the nature and sources of many violence and killings and how this can be resolved. Little wonder that over the years violence persists in the northern part of Nigeria, kidnapping and rioting are not uncommon in the southern and eastern part of Nigeria due to many complex issues of leadership, resource control and distributions among others. What are really the reasons behind the endless cycle of violence that Nigeria has witnessed in the past decade?

Salaudeen Nafisat Funmi, a resident of Kaduna in her word said ‘many innocents are being killed, houses are being burnt and many women cannot go out to find food’. The effect of any violent is always having double effect on women. Women who are still the major home makers and providers of care for children, husbands, loved ones as well as their extended families and communities do not only get killed, they often live in perpetual fear and discomfort. There were many shocking images of children and women killed violently in the last riot in Maduguri and Jos , occurrences that the nation is yet to recover from.

Aminu Tukur believes that the Northern unrest and chaos is more complex in nature, it is beyond General Muhammadu Buhari talking to the CPC supporters to stop the violence. It is beyond 2011 election, it is a face of poverty, hunger, illiteracy, the over the years neglect of the leaders to invest in human development of its citizens, the failure of the leaders to provide job opportunities, invest fully in sustainable development as wel as embracing diversity of ethnicity and religion in politics.
This is the time for our leaders to show sincerity of purpose, time for the newly elected President Jonathan, who has a chance to make a huge difference in the next four years, to get it right.
Laws that are conflicting with the rights of people have to be repealed, provision of health care services, education at all levels, infrastructural development, job provisions, alleviation of poverty, provision of electricity, empowerment of all and sundry, respect for the rule of law, respect for diversity and inclusion of Nigerians in how they are being led will go a long way to help the complexity of violence and human rights abuse and gross inequality in Nigeria.

A 50yr old Nation should not be in perpetual mourning be it due to hooliganism, protests, politics, religion, or poverty.

This article was originally posted on Free2run website.
Posted by The Activist at 10:13 AM

Its sad! Truth, as said in this post, is that this was not a result of the elections only. Its a cumulative effect! As much as i want things to change now, i also realize that it will take a while for that to happen. mindsets have to be changed and educated.

how long are we going to continue with this?Its like a cycle that keeps surfacing every of our election periods.Dont we ever learn from the lost and the inevitable grieve that comes with it.Nigerians,look deep within and break away from any political brainwash and begin to look deep within cos the only ones we hurt is US!

Im emotionally drained by this issue. I want peace that is long lasting but it wont come without justice, and leadership committed to growth and not pockets. Thank you for writing... at least you are doing something and voicing out positions held by many being drowned out by the hate speech.

Hmmm, the accusations, the counter-accusations will go on and will continue till the Government (oops, Mr. President) come to a realisation that the bulk stops at his table. 'Tis not about Buhari (not winning an election), tis not about the elites (inciting the restless and hungry youths)......

Tis about Mr. President (irrespective of tribe and tongue) understanding that we have a national crisis and he should roll up his sleeves, get into the trenches and solve (yes, solve. That's why he's Mr. President) the crisis.

Enough of the politics of rhetorics.....

What is really happening is so heartbreaking. I made a post on my blog about this issue, and I'm happy to hear from one of the comments that the Nigerian Senate is reviewing the NYSC soon

i love Nigerian people.
i love our spirit.
I've been in Nigeria for 5 months after being gone for 12 years
and one thing is certain
we are not meant to coexist.

a creation by the greedy colonist forced two separate groups together and we will struggle until Christ comes.

after 50 years of marriage we still can't stand each other and treat each other as human beings
chalk it up to brainwashing, misguided youth, poverty, indoctrination, politics.

so let us be
separate and friends
not together and enemies.


wow
i've avoided writing anything about this but now i think i will just place this little thing on my blog.

let's just pray that peace will prevail in our time

@ Kafo: it is pathetic really! You are in Nigeria? Are you back finally?