Cats On Tuesdays: I bruise easily

CATS ON TUESDAY is a group of cat lovers
who share pictures and/or stories about their cats once a week,
hosted by Gattina. 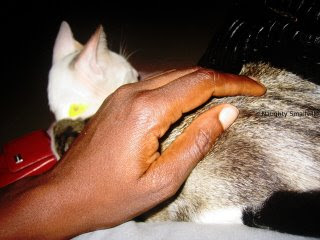 Just like Molly, Smaville her son bruises easily but not with me. Standtall hubby was a disciplinarian of Molly and I thought that was why she left the first time. We got her back but in love and care under my own very nose, she left home again... 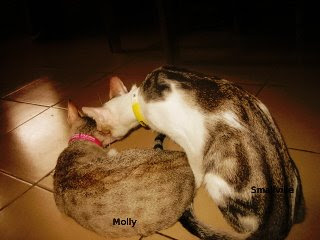 Now Smallville breaking all rules, he would defecate in wrong places, he would always scratch the litter box and wake us up; hubby would ask him to stop and spanked him at times, so he has being taking these personally just like Molly his mother. He defecated on our window last week and hubby and I got angry and spanked him, with me spanking him the most but guess what? He took it out on Standtall hubby and would snare at him any chance he got. He then escaped to the roof and never wanted to come down hence Scofield rescue mission which has yielded good result twice because Smallville is home with us. 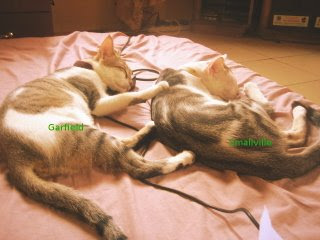 But I worry that one day soon, he will go and never come back like Molly. I hope he will not do that because it's tough out there and I don't want him to go and put himself in danger. Scofield good job! Smallville stay put. Garfield thanks for not taking anything personally like your sister did. Keep being a mother to the spoilt Smallville who bruises so easily. PS: Read War against the people - truths and untruths a Niger Delta story on Sokari's blog
Posted by The Activist at 10:32 AM

I do hope Smallville Doesn't run away...
He has a family that really cares for him,and loves him unconditionally..
How have you been??..
Sorry I've lost contact for a while,had a minor accident a few days ago...involving the door of the car,and two of my fingers!

I had some troubles following ur story, i had to read it twice.

Smallville is d sensitive one, right? eh ya. oya, u & hubby will have to handle her with glove hands now. don't spank him too much oh

Standtall is sharing a very touching story about her HG experiences on BAMBINA. Next week, Nazzy will be with us. You don't want to miss her. Plus, new contributors are still being sought, so feel free to add your own story. Visit http://idreamtofu.blogspot.com for details on how.

Scofield, Garfield and Smallville??? That really made me laugh!

You know Stiggy too is acting up. Molly's genes must be strong oh. He's been going about peeing in corners around the house. He knows he shouldn't do that. His litter box is always so clean I almost want to go there myself! (joke) anyway, i have had to spank him a number of times. I was out of town for two days and left him in the care of a friend. he peed behind the fridge in protest of my absence. Good thing is he has nowhere to run to around here.

I've always loved pets, but I was always more into dogs rather than cats. But your cats - I LOVE! Which breed?

It came to my attention that your blog is popular! Are you aware of this? Let me explain... as I was googleing around Your blog came up in the top 10 under the keyword cats. This is pretty good and you could be making a lot of money through your blog.

In my long absence while traveling in India, I did not know about Molly. So sorry.

I have learned that spanking tends not to work with cats. A sharp reprimand, a squirt of water, followed by a pouring on of love seems to work best for me.

If you hit your cats no wonder they run away. I thought you'd know better than resort to violence. I'm surprised at you.

Cats that miss the litter box can be a) physically ill like with a urinary tract problem, or b) have a mental problem - like depression.

Your hitting your cats can also result in their pooing outside the box in protest. Keep your litter box clean, and in a space where cats can have some privacy. Cats don't like to poop in public.

Encourage good behaviour with praise. Mould wrong behaviour into correct behaviour with gentle guidance. If you want to toilet train, don't leave your cats to figure it out by themselves - spend time with them. Kids dont' potty train themselves, neither do animals.

Check http://www.sniksnak.com/cathealth for some other appropriate responses. AND DON'T HIT YOUR CATS!

In British English “spank” means to slap, hit or beat. Americans “spank” by using a bat or racket. So when you wrote on your blog, “hubby would ask him to stop and spanked him at times” and “I got angry and spanked him, with me spanking him the most” I read that you and your husband hit your cats – possibly with something like a bat.

I didn’t mean to hurt your feelings. I was worried about your cats. I did say I was very surprised to read your blog because you stand for non-violence and education.

When we’re training our kittens, we praise good behaviour with petting and cuddling. We mould bad into good by blowing on our cats faces. That’s what mother cats do. If someone is being very naughty, like climbing the curtains, we hiss – again like a mother cat. It works.

Again, I didn’t mean to hurt your feelings.

@katztales; ah I now understand, the use of English. It wasnt like they were hit. I am really lost for the right English to use for it but it's not like they were hit in a violent way or anything but even that might not be good really.

And like you said, I stand for non-violence and I do appreciate your concern. Thanks for speaking up like a true friend.

When I get angry at my cat, even if that makes me splash water at them to make them to stop being naughty, we make up. They come around and I tell them sorry and they tell me sorry in their own ways too.

@ Katztales: ah I now understand, the use of English. It wasnt like they were hit. I am really lost for the right English to use for it but it's not like they were hit in a violent way or anything but even that might not be good really. The Spank I mean here is like "a mere slapping of buttocks: to slap somebody, usually on the buttocks with the open hand in punishment"


And like you said, I stand for non-violence and I do appreciate your concern. Thanks for speaking up like a true friend.

When I get angry at my cat, even if that makes me splash drops of water at them to make them to stop being naughty, we make up. They come around and I tell them sorry and they tell me sorry in their own ways too.